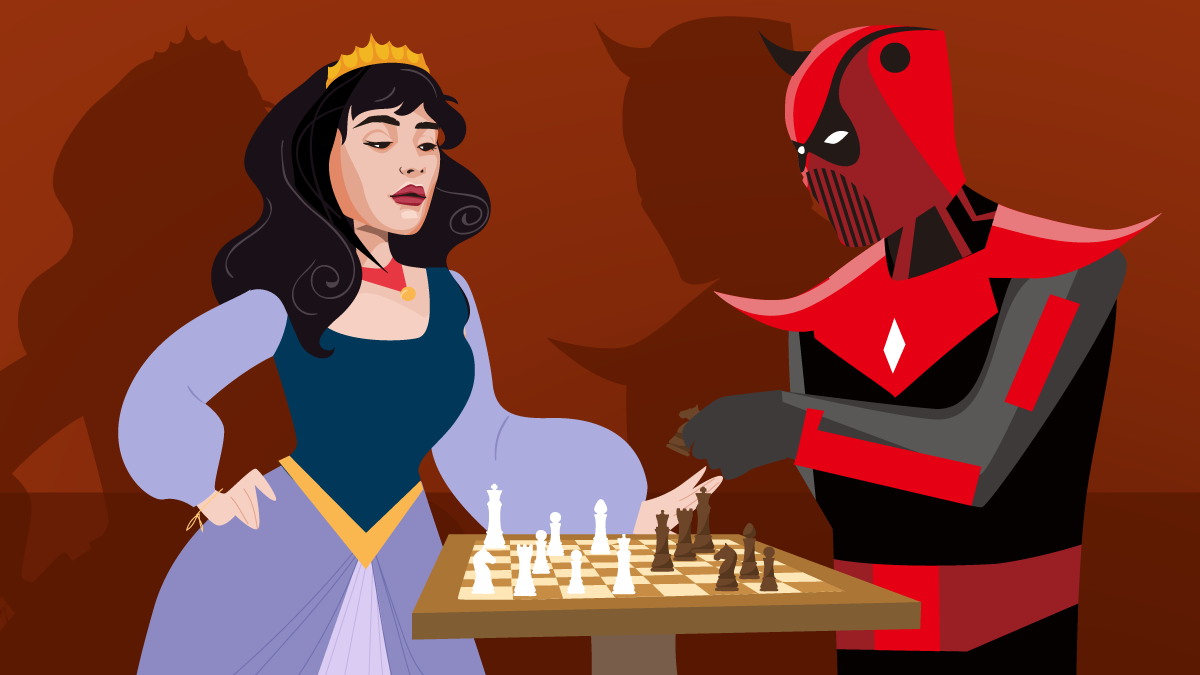 By Roderic March CEO - Nanocrowd
Today, I’m going to describe a new strategic tool we’ve developed to track and understand genre trends in the movie and television industry. But first, here’s a little background on Nanocrowd. We analyze millions of viewer reviews and comments about movies and TV series to understand exactly how viewers respond to each show. Our ViewerVoice™ platform is a set of complex analytical tools based on the words viewers use. Our new strategic tool is based on this platform.

To analyze genre trends, you have to start with the right genres. Traditional genres like drama, action, and adventure are useful descriptors of one aspect of titles, but they’re too broad to be useful for analyzing and predicting trends. We use the viewer’s voice to understand reactions to individual titles. Once we have a mathematical understanding of those reactions, we cluster titles into genres, minigenres, and nanogenre® collections.
Our new genres, built on viewer reactions, expose exciting new connections between titles. For example, one of our genres includes titles that explore the challenging and often humorous nature of human relationships:

When Harry Met Sally is a classic rom-com, while About Schmidt and The Grand Budapest Hotel are drama-comedies or dramedies. When we clustered these titles into genres, they were all in the same genre: Relationship Comedy. This genre includes romantic comedy, friendship comedy, and family comedy because these titles engage audiences in a similar way.
People who like romantic comedies often also enjoy friendship comedy or family comedy, because they explore the comedy of our most important relationships. If you’re interested in more details, we wrote about Relationship Comedy in our article about Crazy Rich Asians.
Similarly, our Victorious Underdogs genre includes titles that are often listed in many different traditional genres and sub-genres.

Napoleon Dynamite, Friday Night Lights, and Finding Forrester appear to be very different, but in the viewers’ reactions, they all cluster together along with other titles that describe “finding a path to victory in the face of adversity.”

These are Nanocrowd genres, and they redefine our understanding of what holds titles together. You can learn more about these genres in our “Genre Evolved” article.

When we started to build our strategic tool to track genre trends, we used these new genres because they capture the true themes that audiences respond to in the shows they watch. There really isn’t any value in tracking the performance of the huge traditional “Drama” genre because it doesn’t actually describe any specific type of show. By starting with our genres like Epic Heroes and Victorious Underdogs, we have a strong audience-driven foundation for our analytics.
Here’s an example of our new tool at work. We use box office revenue by genre to create a 2x2 matrix of the theatrical-release movies’ performance. Each bubble is one of our top 10 genres, and you can see at a glance which genres are the largest (the bubble size is the 2020 total box office revenue). The change in total box office over the last decade is shown on the vertical axis, while the change in box office per title (median box office) is shown on the horizontal. Both are adjusted for inflation. 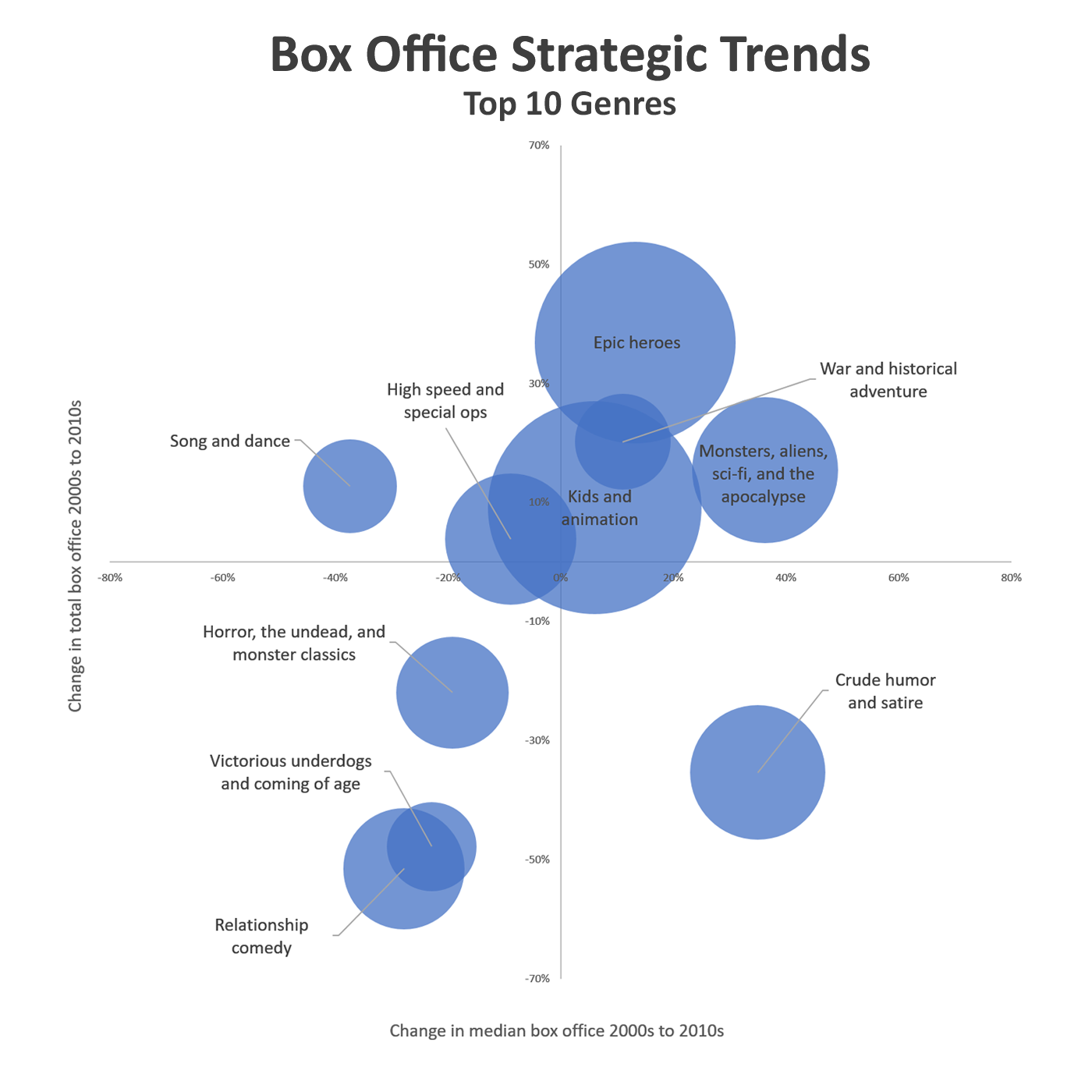 Epic Heroes is one of the largest and fastest-growing genres. Its bubble is in the top right quadrant, showing that it’s growing in total box office (37%) and also growing in median box office (13%). This genre includes any title that’s driven by one or more bigger-than-life heroes. These titles currently live in many different traditional genres, such as action, adventure, fantasy, superhero, or science fiction.

THE DECLINE OF COMEDY

In the last few years, there has been lots of talk about the decline of comedy. For example, Gary Thompson, a columnist at The Philadelphia Inquirer wrote: Don’t Laugh: Movie comedies are disappearing. If you look at the two comedy genres in the previous chart (Relationship Comedy and Crude Humor & Satire), you can see why people are talking about this trend. Both genres have declined over 30% in total box office.

However, the strategic value of the 2x2 matrix is clear when you review Crude Humor & Satire. The chart shows that this genre has declined in total box office by about 35% during the last decade. However, during that same time, median box office actually grew by about 35%. This data shows that the revenue for titles in this genre was actually growing while the total revenue was shrinking. Several things could account for this trend, but it certainly indicates that there’s still big audience interest in Crude Humor & Satire titles – with a great opportunity to release a successful title.

One of the best things about building genres using an analytical foundation instead of an editorial one is that you can break them down into minigenres or nanogenres. Let’s focus on the genre “Horror, the undead, and monster classics.” If we stopped our strategic analysis using the chart above, all we would know is that this genre is in the lower-left quadrant, where both the total box and median box are declining.

However, if we break the Horror genre down into its four primary minigenres, a very different picture emerges. 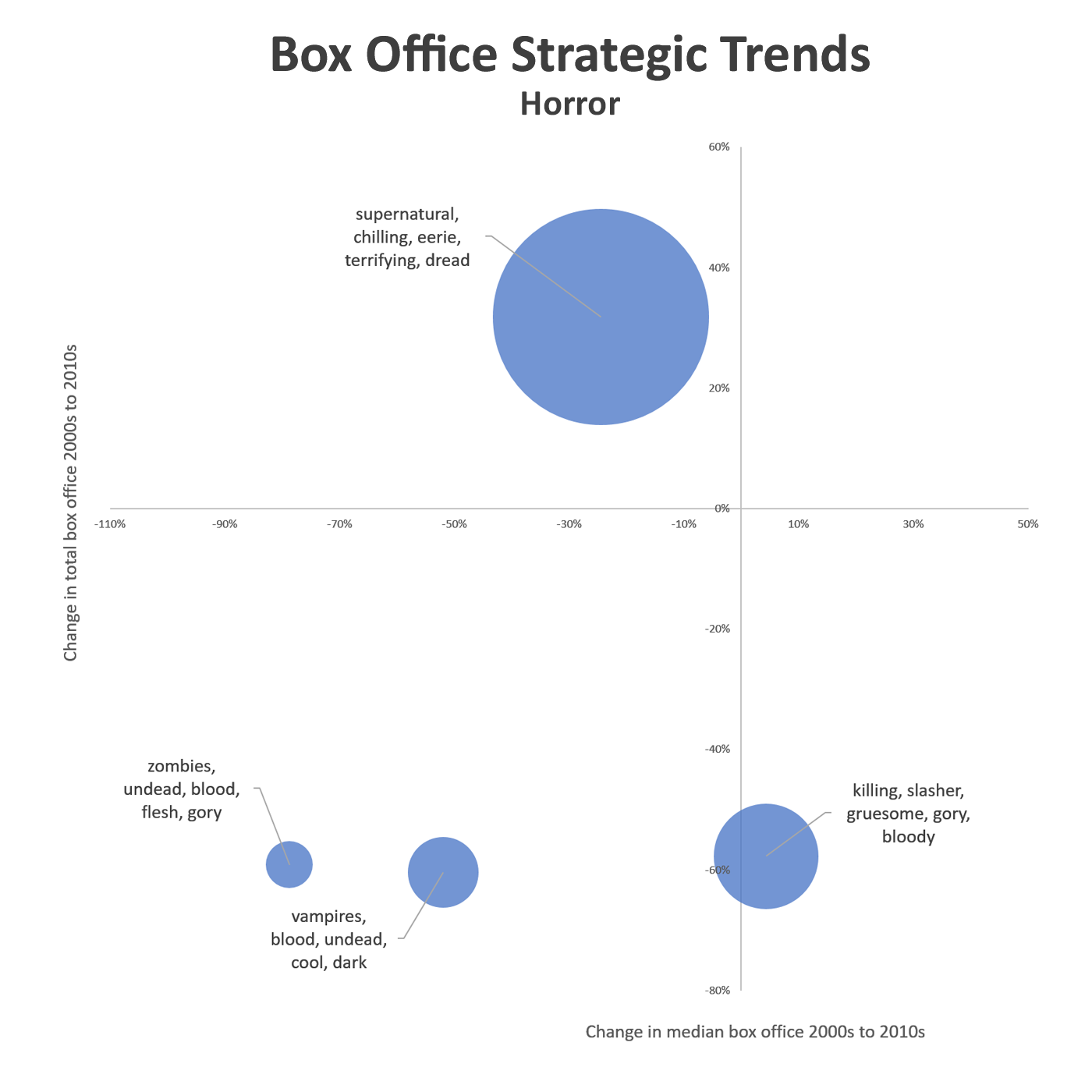 Sure enough, the Zombies, Vampires, and Slasher minigenres have all lost over half of their total box office. However, the largest minigenre, described with audience keywords of “supernatural, chilling, eerie, terrifying, and dread,” has been growing rapidly.

Market insights don’t only apply to the large genres. The 2x2 bubble chart below shows the position of the nine smaller genres. 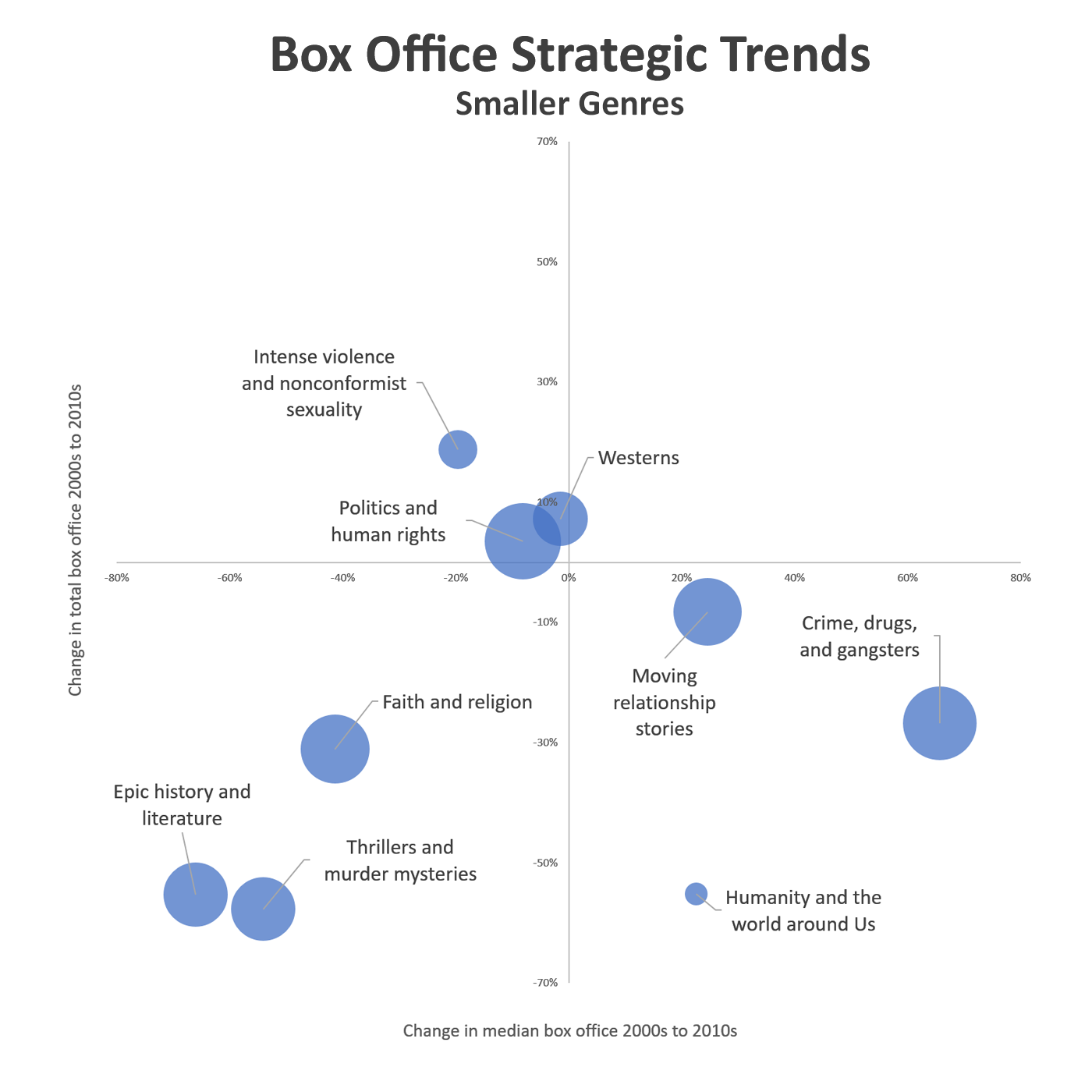 Nothing really stands out as attractive here – there are actually no genres in the top-right quadrant. Once again, we have to dive into the minigenres to get the full picture. The genre “Politics and Human Rights” looks pretty flat in the chart above, but minigenres highlight opportunities within this genre. 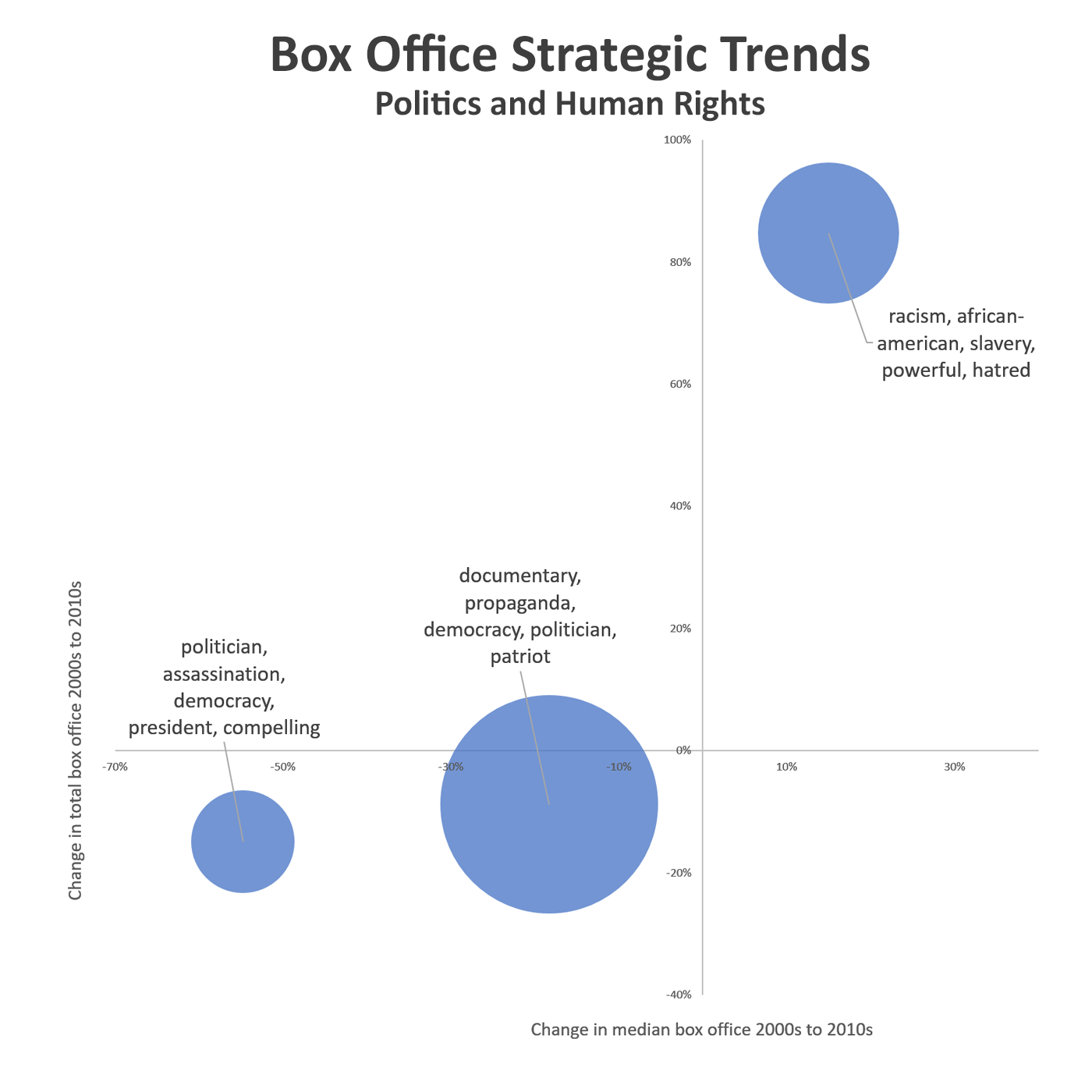 One minigenre stands out: powerful stories about racism and slavery (with viewer keywords of “racism, african-american, slavery, powerful, and hatred) are growing quickly in total box while increasing moderately in median box.

Our strategic tool provides insights into how genres are performing and where key opportunities exist. Not only which genres are growing and which are in decline, but also what to expect in terms of revenue per title. The added power of breaking genres into minigenres allows anyone who is developing new projects to identify the most attractive markets for their title.
Download Strategic Genre Trends
Contact Nanocrowd to Learn More